MCX Silver seems to be exhibiting amazing Elliott wave patterns and with the help of indicators like MACD and Parabolic SAR one can identify the emerging momentum and ride the trend accordingly.

Below shows the chart and research applied on MCX Silver using Parabolic, MACD, with Elliott wave counts which helped us to gauge the positive up move. 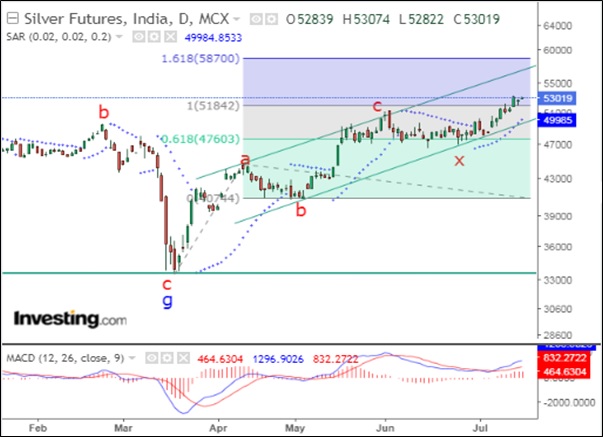 Wave g was retraced in faster time which indicates that most probably the next leg on the upside has begun. But we are not yet ruling out the possibility that the rise is only wave x which we have shown on the daily chart. The internal counts suggest that wave x is forming a complex correction and the second set of up move has just begun. The rise can be seen well within the channel and the upper trendline resistance.

MACD & Parabolic SAR – The MACD indicator is a momentum indicator based on the difference of the 12 and 26 EMA. The MACD line crossing above the signal line indicates rising momentum. We can see on the daily chart MACD recently crossed the signal line on the upside and both are already above the zero line. The PSAR works best when the market is trending. The MACD has now confirmed that bullish momentum has just ignited and the PSAR has already moved below price and it could not be a better opportunity to go long using the PSAR as a trailing stop loss.

P.S – Levels are hidden purposely as this study can only be used for learning purpose.

To know more in detail where will Silver head further, where will it stop get the copy of recent Monthly Research Report which has in-depth studies, accurate levels described. Subscribe now and do not miss the amazing opportunity to ride the up move.

Following call was given on MCX Silver Future on Intraday Basis:

Get strategies which could be applied across all segments in the upcoming ONLINE training scheduled on 25th &26th July in Master of Technical analysis (MOTA). Also learn about Neo wave, Elliott wave, Time cycles scheduled on 22nd and 23rd August Master of Waves (MOW). Dedicated discussion groups will be created to keep the learning going in future. Register now only limited seats left Know more here