Copper has shown a very strong rise in 2020 and continues to sustain at higher levels although the rise is steady for now. The medium term trend for the metal remains positive.

This theory states that in an impulsive moves prices move higher in form of 5 waves whereas correction happens in form of 3 waves. Along with this there are other guidelines also which says that wave iii tends to move towards 1.618 to 2.618 times of wave i.

In the recent up move of Copper, in the below research wherein wave 3 seems to be complete as wave 3 has achieved the target of 1.618 times of wave 1 projected from the end of wave 2. 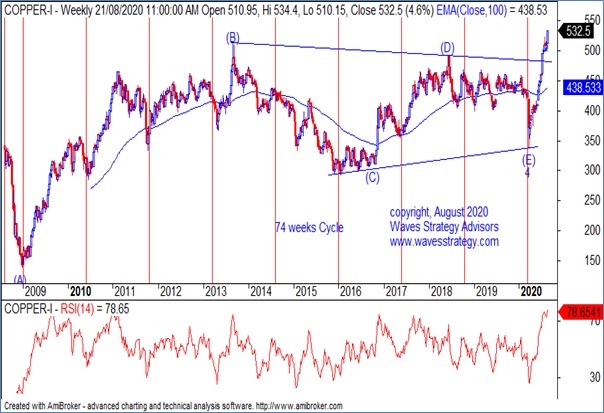 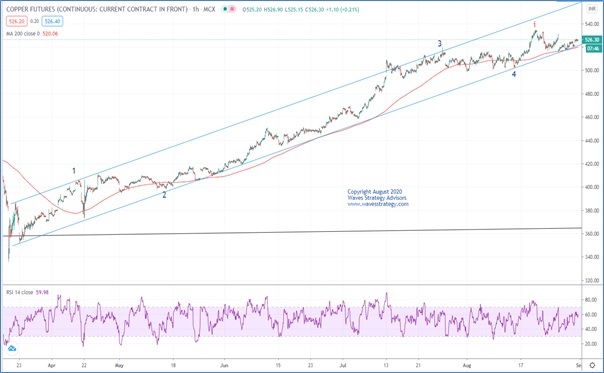 On the weekly chart the rally since February 2020 has been very strong in the form of wave 5 which can be the largest wave in the commodity markets. The rise is impulsive and as we have not yet seen any significant correction yet, it means that this wave is sub-dividing into impulse pattern. The low is formed on the cycle day as well.

We are seeing the impulsive rise of wave 5 wherein wave 3 seems to be complete as wave 3 has achieved the target of 1.618 times of wave 1 projected from the end of wave 2. Currently wave 4 seems to be on going. We can see that price has enough room on the upside to rise within the channel.
On the hourly chart wave ii of wave 5(blue) seems to be on going .Price is testing the support zone of the 200 hour EMA and the channel support. A break above 530 levels can indicate that wave ii is in place and wave iii has started on the upside which can take price towards the upper trend line of the channel.

In a nutshell, MCX Copper can start to move towards 525 – 530 levels over the short term as long as …. support levels hold intact. The medium term bias continues to remain bullish.

Conclusion is that Elliott wave theory with time cycles takes in to consideration past price and timing movements to predict the future as prices are derived by the psychology of mass traders. In simple terms, applying Elliott wave on price charts is as good as gauging the psychology of people who are driving the prices. Note: Use this article for study purpose only.