Gold is known as a hedge against Inflation and currency devaluation. Gold is following its own independent Elliott wave pattern and Time Cycle.

Elliott wave helps us to navigate the trend of the market. MCX Gold has continued to be showing positive action over the past few sessions. It has worked out well especially if you know how to apply the Elliott wave along with the Time cycle.

In the below chart we have shown the Gold movement along with the Neo wave and 51 Days’ Time cycle. 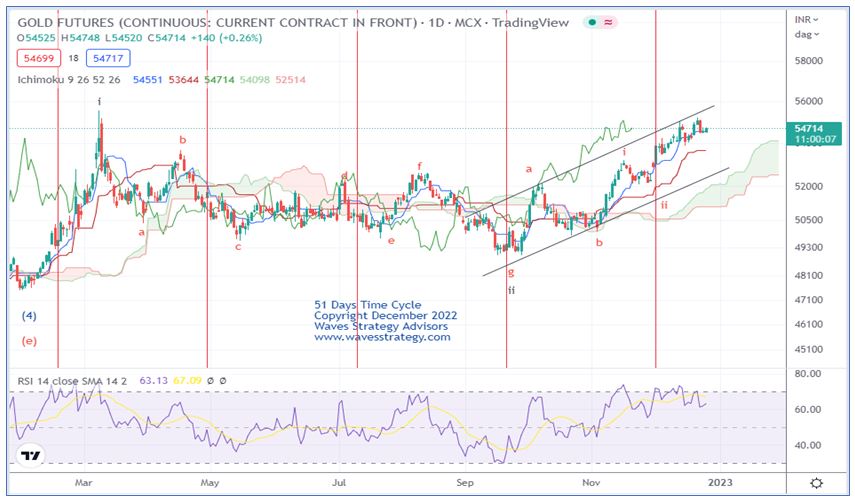 Mcx Gold Weekly outlook: Prices are taking support of the cloud Ichimoku cloud from where the bounce was witnessed towards 55000 levels. As per wave perspective, in the mid of 2016 primary wave (4) completed and since then primary wave (5) is ongoing which is subdividing in nature. In the first quarter of 2022, intermediate wave 4 of primary wave (5) finished its course in form of Triangle pattern and since then intermediate wave 5 is ongoing wherein minor wave ii has completed on the downside and the recent up move that we are witnessing is in form of wave iii which is considered as a strongest one.

On the daily chart, entire wave ii was in contraction pattern. As we are in primary wave (5) which is moving in form of terminal impulse so legs will be corrective in nature. Currently, wave c is ongoing on the upside in which we are in minute wave iii. On the other hand, Gold is following this channel exceptionally well since October 2022. Currently prices are trading near the channel resistance so, it would be interesting to see whether we get a breakout or reversal back from it.

Time Cycles is a very important Technical Analysis study as it helps us to capture the important lows and ride the trend later. On the daily chart of Gold, the vertical lines represent the 51 Day time cycle which we have identified on this time frame. Recently cycle was due on 1st December and prices formed low exactly near the cycle after which, good up move was seen. The next cycle is due on February 2023.

So, looking at the overall structure, overall tone is positive. Therefore, accumulating gold at current levels in a staggered way can be a systematic strategy to ride the trend. Avoid catching tops and use dips as a buying opportunity for a move towards 55800 followed by 56300 as long as 52700 holds on the downside.