If Nifty in Expanding Triangle Be Ready for Volatility!

Nifty has continued to drift higher over past many days. Infact it has been nearly 26 days since Nifty has managed to protect the prior lows on closing basis (excluding outside candles). This is a typical behavior of an Expanding Triangle pattern that creates the much needed euphoria by giving a throw-over above important trendline levels. 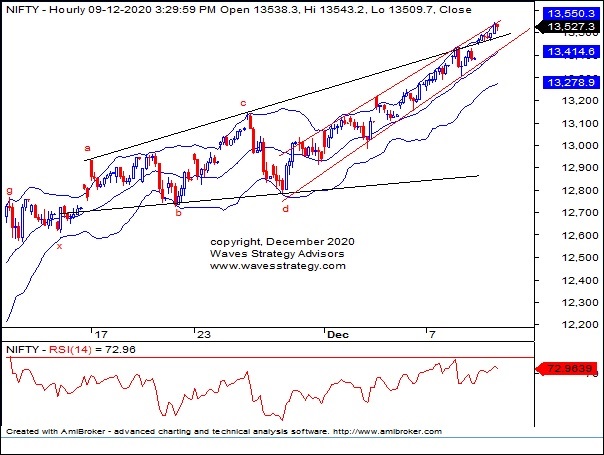 Elliott Wave analysis: Following is an excerpt from the daily morning research

As indicated on the previous day, the ongoing up move post wave x can either be a Diametric or an Expanding Triangle pattern as wave e is the biggest so far. Expanding triangles are most common during very large complex corrections.

As shown on the hourly chart, post x wave formed near 12600 levels, prices are probably in wave e as of now. As per Neo Wave, e wave will usually be the most time consuming and complex segment of the expanding triangle. The most typical construction of e wave would be a Zigzag (in small expanding triangles) or a complex combination of corrections in larger patterns. Also, Neely says, the e-wave will usually almost break beyond the trend line drawn across the top of wave a and wave c. As shown on the chart prices have now broken above the a-c trendline before reversing on the downside. However, only when the price breaks the important support levels on the downside, we will be able to conclude that the pattern is over. Until then, existing buyers can keep riding the trend unless there is a close below the prior day’s low.

Also note that in addition to the above there are also Channels, RSI, Bollinger Bands® applied which further helps to add conviction and provide precise trade setup.

Learn to Trade Profitably that can help increasing the accuracy right from the fundamentals of Technical analysis to Elliott Waves, Neo Waves and Time cycles, Become Market Wizard (BMW) is meant exactly to point out which techniques to be applied during what phase of the market. It does not matter if you are already an expert trader or want to become one. This is meant for increasing accuracy, conviction and consistency. Early Bird Ends on 12th December 2020. Know more here

Get access to the daily research reports and Intraday / Positional calls on Nifty, Bank Nifty, Stocks, Commodity, Forex. Subscribe now and get research report free along with it. Get access here