ITC had finally given breakout over its consolidation phase. Recently we were able to capture the up move in ITC which was covered in The Financial Waves Short Term Update on 20th November 2020 morning 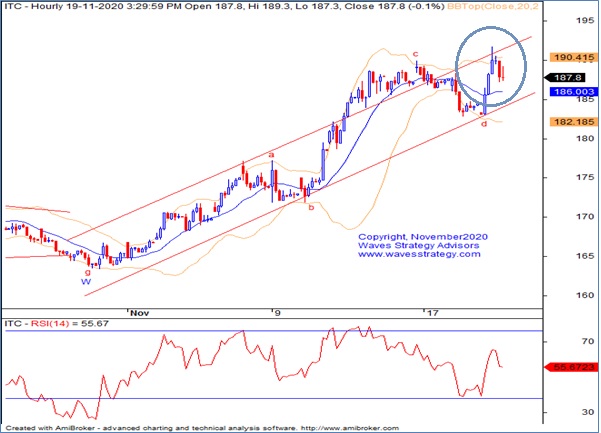 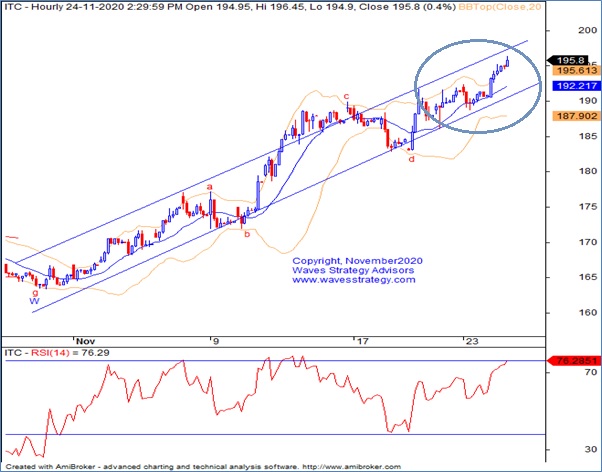 ITC is moving in complex corrective pattern wherein wave x blue seems to be moving in the form of Diametric pattern. On the daily basis, the 13-day exponential moving average has been acting as a decent support as of now.

On the hourly chart, we had shown Bollinger band which suggests that prices were taking support at the lower band and then moved towards the upper band. Prices closed near upper Bollinger band which is a sign of bullishness for the coming session as long as lower Bollinger is intact on downside. Currently wave e of the Diametric pattern is unfolding on upside.

In short, ITC seems to be sideways to positive. A break above 192 can take price towards 196 or higher levels as long as 182 remain intact on downside.

Happened: ITC has witnessed classic breakout in today’s session the stock hit its intraday high of 196.45 levels which was forecasted in our daily report. The stock is moving precisely as expected.

The above techniques are basic technical analysis concepts but when combined together it gives very high probable setups. In addition to this, in the daily research report, “The Financial Waves Short term update” we have shown short term daily chart as well. This daily research report consists of 3 stocks along with Nifty, Elliott wave counts, and many other technical analysis concepts combined together. For subscription Click here

HURRY UP!! Only 2 Days left! For the Unbelievable discount offered on advisory and research reports by Waves Strategy Advisors under DIWALI SPECIAL OFFER 2020 Click here to avail the offer now