JSW steel has been moving precisely as per channel and Neo wave Diametric patterns. In addition to that ADX indicator also suggested the up move. Read below the detailed explanation on indicators and wave patterns. 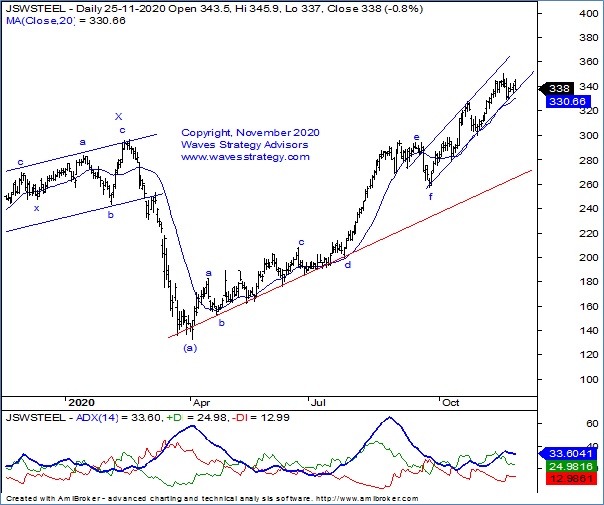 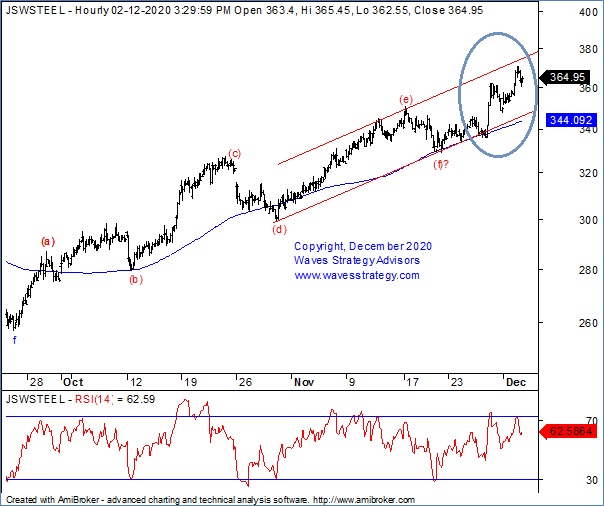 Wave Analysis: Following was mentioned on 20th July when the stock was near 338 levels.

As shown daily chart, we have shown ADX indicator on the daily chart which shows the strength of the trend. ADX is seen rising indicating strong momentum. We can see +DI is above –DI and ADX is quoting near 33 indicating strong positive momentum in the trend. One can stay bullish as long as 329 remain intact on downside. As per wave counts wave (b) seems to be forming Diametric pattern wherein wave g is unfolding on upside.

On Hourly chart, 110-day period Exponential Moving Average is acting as a brilliant support line and it has provided support at regular intervals. As well as prices are taking support from lower trend line of channel support. This suggest that one should be in the direction of the ongoing trend as far as this line is protected and any pullback towards the same should be utilized as buying opportunity.

In short, JSW STEEL seems to be sideways. A break above 345 can take price towards 355 or higher levels as long as 334 remain intact on downside

Happened: JSW Steel has showed precise movement as expected and signalled by ADX and Wave counts. These levels were forecasted weeks ago even before its happening using basic and advance technical methods applied across daily and hourly time frames as you can see in above research.

Learn the power of Elliott & Neo wave and equip yourself with tools and indicators of technical analysis in the upcoming Online Become Market Wizard which is subdivided into two modules- MOTA and MOW Know more here. Early bird offer end on 12th December 2020 Hurry up!!!