Jubilant Foodworks: Ending Diagonal Pattern and up move, What is next from here on?

Jubilant Foodworks had been moving in a rising channel since September 2019 but using the Ending Diagonal pattern in Neo Wave coupled with simple tools like EMA and channels we could forecast that the stock was about give classis break out from the range. 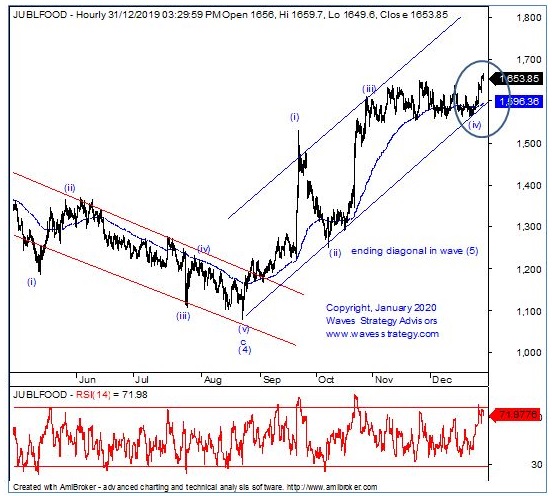 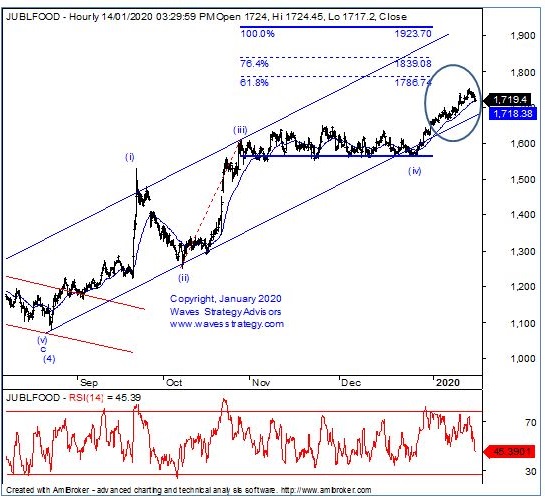 Wave analysis: Following was mentioned on 01st January when the stock was near 1653 levels.

On the daily time frame prices are moving precisely within the blue channel. As per wave perspective we continue to move higher in form of wave III or wave V. Either ways trend remains positive. Within which (5) seems to be unfolding in the form of Ending Diagonal pattern as shown on the hourly.

On the hourly chart, the stock is moving in upward direction in the form of wave (v) of minute degree. In the previous session the prices break above its consolidation range of 1560-1630 levels and made its new high near 1655 levels. As long as the EMA stay intact on lower side we might see prices to move towards 1700 or higher level.

In short, trend for Jubilant food remains positive as long as we do not see any move below 1590 levels. Also we might continue to see prices moving towards 1700 levels.

Happened: The stock performed precisely as expected it made its new 52 weeks high near 1752 levels on 13th January 2020

I will be starting 3 months mentorship from February 2020. Intention is to give away everything I have learned over decades that a trader should know. Discipline and application is the key for success as a trader. I will be taking only a few candidates. Register here

Do not have time to track the markets. Get access to the daily advisory calls on Equity, Commodity, Forex markets directly via sms or whatsapp. Know more here