WTI Crude Futures for May contract turned negative for the first time ever and touched nearly $-38, Yes it turned negative which means that someone taking delivery for WTI Crude will also get paid to the extend of $-38 per barrel. Astonished!

Year 2020 started with unprecedented movement across financial markets and everything is linked with ongoing Corona Virus pandemic. You will acknowledge the fact that the ongoing scenario is never seen anytime in the past.

Collapse in WTI Crude prices clearly indicates Oil glut and the vulnerability of the global economic scenario. If the lock down is continued for a month or more there will be more people who will die due to economic depression than due to Coronavirus. We are in a precarious situation and there is nothing right or wrong in this scenario. It has to be weighed against the risk of what will be more fatal – economic downturn or CoroconaVirus. 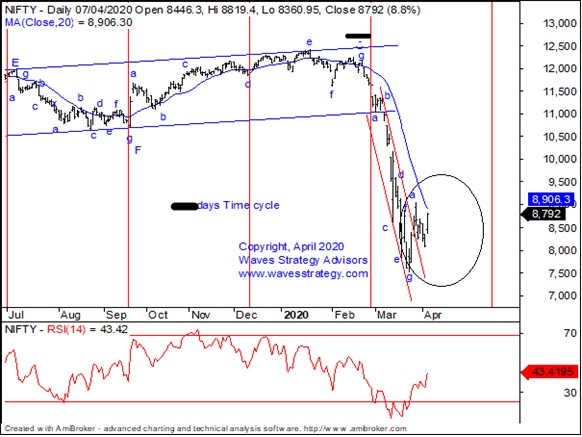 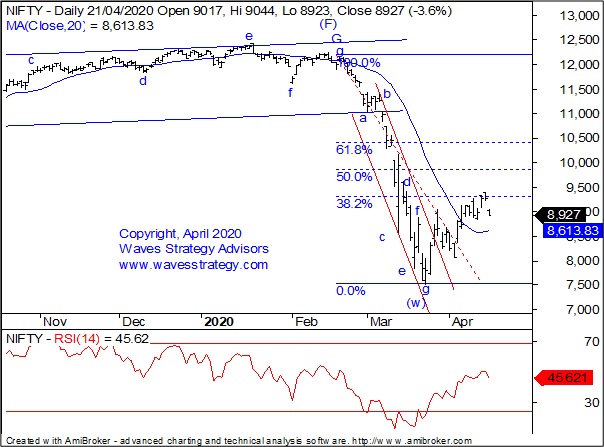 Following was mentioned in the monthly research on 9th April 2020:

Nifty can move in a broad range and non trending fashion. On upside 9480 will be the key resistance and crossing of the same is required for any further short term positivity whereas move below …….. might challenge the ………. levels again. We are not out of the woods and we continue to dwell in Bear market territory much bigger than 2008! Move below ………. will start next round of selling towards …….. Until then enjoy the grinding in sideways trend… BANG ON!

Nifty was trading near 8775 levels when following was mentioned – On the hourly chart we can see formation of an inverted head and shoulder pattern in progress, we have marked its neckline with a dotted red rising trend line. As per the wave perspective minor degree wave b within wave x completed near 8000 levels and price is now moving higher in the form of wave c on the upside. As wave b retraced more than 61.8% of wave a and also took more time to form than wave a, it confirms that a flat correction is unfolding as per advanced Elliott wave. We have shown 76.4% and 100% projection of wave a form the bottom of wave b which lie at 9067 and 9382 respectively which can be considered conservative targets on the upside for wave c as this zone also coincides with the upper channel line. BANG ON!

Happened: Nifty has moved in lock step fashion both as per the monthly research report and daily research update. We have been able to capture each of the swings so accurately. Nifty touched the high of 9390 on upside and reversed on downside in today’s session.

I am myself thrilled to see such precise movement during the eventful period and everyone is just too focussed on the news rather than Elliott wave patterns.

We had amazing session on Master of Waves and prices have behaved as per Terminal pattern discussed on 18-19th April 2020. With MOTA and MOW was welcome with great receptivity, I am glad to announce the next batch of Mentorship that starts in June 2020. Get ready for the excitement to see the path of markets before it happens. Know more here