Nifty, we are looking at the current up move as only a corrective drifting in the form of Ending Diagonal or Terminal pattern.

In Elliott wave theory, a wedge pattern is known as Ending diagonal pattern or terminal pattern and occurs either in wave C or wave 5. It is a type of formation in which trading activities are confined within converging straight lines which form a pattern. This pattern has a rising or falling slant pointing in the same direction. It differs from the triangle in the sense that both boundary lines either slope up or down.

The following is example of Ending diagonal pattern occurring in wave c (blue) Also post pattern implication suggest prices travel to the start of this pattern in 1/4th or 1/2 the time which we are seeing currently. 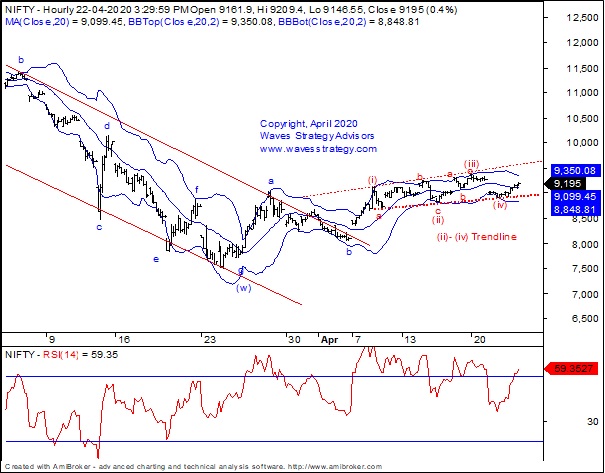 Nifty is moving in lackluster fashion with prices finding support near the lower end of the Bollinger Bands and bouncing sharply from there. Index heavy weight Reliance Industries was up by more than 10% post the announcement of Facebook taking 9.99% stake in Reliance Jio for a whopping 43,574 cr. This is a huge deal and the stock prices reacted by closing more than 10% higher. This simply shows that index heavy weight can drive the entire index. Eventually the other stocks also participated. Reliance alone contributed nearly 100 points up move on Nifty itself. The overall breadth remains slightly positive during the day as the index gained steam during later part of the day.

Oil glut: Crude oil continues to remain worrisome as we can see even the May future contracts have continued to crash globally. MCX Crude is down another 30% in single day that indicates the oil glut. Majority are busy focusing on the fact that it is a storage issue but forgetting the bigger picture that there is absolute no demand across the globe. Even if economic activity starts post lock down it is going to be in phased manner which will surely not result into the demand picking up. Most interesting aspect is that the oil marketing companies like IOC, BPCL, HPCL has continued to be a major laggard despite of oil prices crashing. This simply shows there is absolutely no demand which has resulted into such a fall in global Crude prices and it is not a very promising signal. There is going to be major chaos in international markets due to Oil glut and it would not be surprising to see a possible global tension and war like situation eventually if oil prices do not pick up. It will be countries that will go bankrupt now and forget about individual companies. We saw crash in Crude in 2008 and this is again much bigger crash than that. This is the reason we have been comparing the recent fall across global market of the magnitude of 1987 and not that of 2008.

Now coming back to Nifty, we are looking at the current up move as only a corrective drifting in the form of Ending Diagonal or Terminal pattern. The fall of 21st April hinted that the same might be over but the deeper upside retracement and looking at Bank Nifty chart it seems that the Terminal pattern is still ongoing and the fall was only wave iv with wave v currently drifting prices higher. Now break below 8900 is required which will break the ii-iv trendline and indicate the down move is starting. Until that happens expect sideways action to continue within the broader range of …… levels.

In short, expect Nifty to move in a range for now and participation from broader market is going to be crucial. Keep a close watch on Crude as that will set the tone for next few months of global trend.

Isn’t it a thrilling experience to see markets moving amidst all the events exactly as per the rules and certain defined patterns? This is the power you can get when you learn about Neo wave which is advanced concepts of Elliott wave and do the forecasting yourself.

I am glad to announce the next batch of Mentorship that starts in June 2020 which cover all of the above methods in detailed. Know more here