Nifty has continued to rise despite of increased number of cases for Covid-19 and India-China border tension.

This simply proves that markets move ahead of the events and should not be traded based on the news.

The only thing that works is looking at the charts and applying the various techniques that has proven track record. We have also captured sharp momentum in stocks like India Bulls Housing Finance which was up by 50% in two days. Refer the research over here

Following is taken from the monthly research published on 11th June 2020, Nifty has continued to climb further on back on negative events and highest Covid cases. 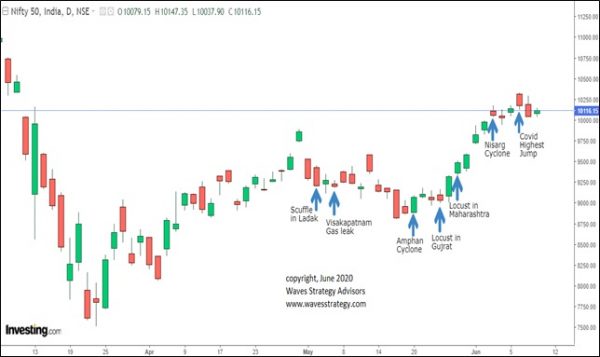 Nifty when bottomed out again near 9000 levels there were series of bad news one after the other. Despite of all this both Nifty and Sensex has continued to rise sharply after forming a low near 9000 levels in the current upswing. This up move has been sharp and fast and resulted into nearly 1200 points rise in just 6 trading days. Post that there has been sideways action but the near vertical rise was sufficient enough for majority to be again taken by surprise or rather shock. We did publish in our daily morning research report on 28th May 2020 the following – “Nifty moved sharply despite the worst GDP expectations post-independence, locust attack, cyclone and Covid-19. Despite of all these negative news events markets are continuing to inch higher which are going to take majority by surprise or rather shock, who believe that market moves based on the news. We believe that market discounts the news in advance and move ahead of the events and yesterday’s movement was a clear indication of the same. On the daily chart Nifty managed to close above the prior day high. Nifty has bounced back from the lower end of the Bollinger Band back on the upside and the resistance of the same now comes towards 9650 levels. The overall outlook over the short term will remain positive unless we see a close below the prior day low”

Happened: We later even gave the target of 10300 levels when prices crossed above 9650 – 9700 levels and Nifty has touched the high of 10328 on 8th June 2020. The reason for reiterating this is to highlight that events are not responsible for financial markets movement and it moves independent to that. What majorly moves the market are Time cycles and in this research we are combining the entire long term to the short term cycles together.

Cycles from Monthly to smallest Time frame charts – For a cycle practitioner the most important aspect is to understand that there are multiple cycles nested together. Prices behave in a cyclical fashion and cannot be independent to it. Everything in nature and financial markets is governed by cycles right from the Solar Cycle which is 11 years, Lunar cycle of 28 days, Seasonal cycle, Economic Kondratieff cycle of 54 years, Decennial cycle 10 years, Presidential cycle of 4 years and many more. It is our effort to understand the various cycle currently being active on the given asset class and see where we stand with respect to them. The simplest way of cycle identification is to see if there are low being formed in systematic fashion. There are various tools available to Detrend the prices and understand the underlying cyclicality. J. M. Hurst’s has brought forward Hurst’s Cycle analysis which has opened up another realm of looking at markets and timing it right from the smallest time frame to the biggest degree.

For a cycle enthusiast here is an eye opener – While I was deriving the actual cycles based on different advanced methods each of the cycles that we are talking were derived separately. It was only later when the independent cycles were put together the synchronization across time frames simply thrilled me.

To see the complete detailed research on Cycles along with its application on charts get access to “The Financial Waves Monthly Update” along with the “Momentum Stock research” to make the most out of this Bear market rally! Subscribe here Now before the trend is over.

Mentorship June 2020 batch started with Day 1 discussed about Price action, Trading psychology and looking at charts that you might never have thought off. Amazing session!