Nifty has been moving precisely as expected based on advanced Technical analysis concepts like Elliott wave – Neo wave and Time cycles.

Look at the below chart that shows Neo wave counts (latest counts are purposely removed) with a few dates on the chart: 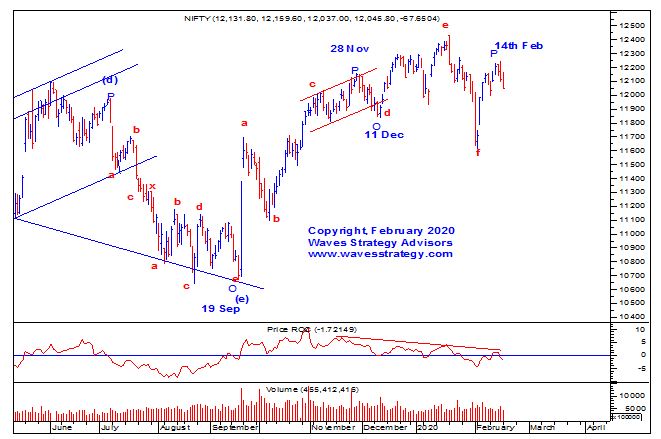 Following was mentioned in the monthly research report “The Financial Waves monthly update” on 11th February 2020.

Neo wave pattern: The entire rise from the low of 11670 made in September 2019 has been in overlapping fashion. By overlapping it means that there is no clear impulse and we see swings on the downside enters into territory of earlier highs or tops. The crash on the Budget day took prices towards 11614 levels which was below the high made by wave a near 11695. This further confirms that the rise is non – impulsive as many of the Elliotticians are trying to count. We can see an earlier contraction from a-b-c-d and now expansion from e-f-g. So this is typical property of a Bow – Tie Diametric pattern. Prices are currently in wave g of this pattern. It is normally found that wave g travels anywhere between 50% to 76.4% of wave a that gives the probable target area as 12150 – 12400 on upside. This is a big range but being in the final leg of Diametric pattern it is difficult to give the exact level for the pause in the trend. As the ongoing leg is wave g of (f) we should start seeing slower momentum even on the hourly time scale. The same will be highlighted in the daily equity research report as and when we see faster retracement below the last rising segment that will confirm that intermediate degree wave (f) is in place and the bigger downtrend is starting.

Time Forecasting date: Post the corporate tax cut and sharp rise in prices in September 2019 we have shifted the Time cycle which worked well in capturing the low in the form of wave d (red) shown in Figure 3. The same cycle will be forming a low in …… last week. So, the cycles are in sell mode but prices are still moving higher. …. To avoid the confusion we are keeping a close watch on the prices to see how it reacts as and when it approaches the cycle by end of February.

In a nutshell, we continue to see series of negative divergence across the time frames indicating that the momentum is slowing down right from monthly, weekly and daily time frames. …….A sharp fall below this support zone will be an indication that the bigger degree downtrend is starting. It is time to be cautious… BANG ON!

Nifty has behaved precisely as expected and also showed in my latest webinar on Nifty Bank Nifty Divergence Time to be Alert! You cannot miss seeing the power of Neo wave in the webinar.

I have shown the entire path of Nifty in the above webinar.

So, how to trade right from scratch of understanding the context of market, Price action, plotting a chart to the indicators to Elliott wave, Neo wave, Time forecasting dates and much more in the upcoming Become Market Wizard (BMW) Get the complete details here

Subscribe for the daily equity report “The Financial Waves short term update” and see yourself how you can capitalize and trade each of the swings using simple logical patterns and methods. Subscribe annually and get the monthly research along with it. You cannot miss the next big trend. Get access NOW