While trading the market it is important to understand the behavior of the market. We believe that basic as well as Advanced Elliott wave can help to capture the next trend. In today’s session sharp fall in Zeel was witnessed from 249 to 228 levels. Such fall can be surprise for many investors or traders however we have been continuously mentioning in our updates that trend of Zeel was at matured stage due to the formation of Ending Diagonal Pattern. 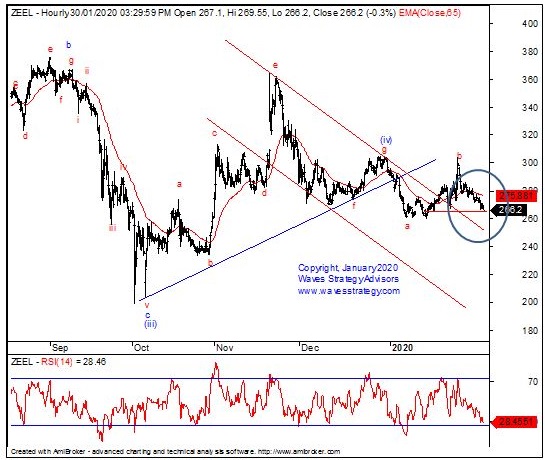 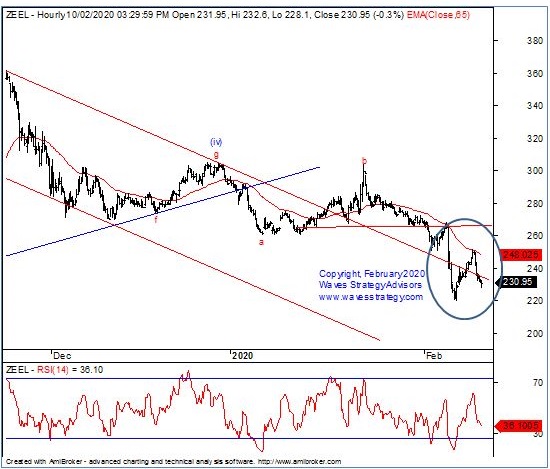 Wave analysis: Following was mentioned on 03st January when the stock was near 266 levels.

On Daily chart of Zeel, prices are precisely moving within the blue downward slopping channel. As per wave counts we seem to be moving in wave (C) (blue) which seems to be forming an Ending diagonal pattern. Currently wave (v) of the corrective pattern is under formation which also seems to be forming ending diagonal and its internal counts are shown on the hourly chart.

As shown of hourly chart, prices are currently moving in the form of wave (i) of wave (v) in the form correction where wave c (red) is in under progress. As long as 65 day period moving average is intact near 275 levels on upside we might continue to move lower towards 250 levels which coincides near the upper trendline of the red channel.

In short, trend for ZEEL looks to be negative. Break below 260 levels can resume the downtrend for the move towards 250 levels as far as 275 remains intact on the upside.

Happened: The stock performed precisely as expected it made its intraday low near 228 levels and its down by 7 % in a single session.

Do not have time to track the markets. Get access to the daily advisory calls on Equity, Commodity, Forex markets directly via sms or whatsapp. Know more here