What is difference between Elliott wave and Neo wave? Application on Nifty charts Neo wave is an Advanced Elliott wave method with a greater number of rules and newer patterns to increase the overall objectivity. Whereas Elliott wave which was originally discovered by R. N. Elliott in 1930s. His original work mentioned that stock market does not move randomly but in systematic fashion. This systematic movement in prices are in form of waves. Normally there are 5 steps forward and 3 steps backward resulting into a net progression which is valid for stock market as well.

The above 3 basic rules if followed then the price movement under consideration can be classified as a normal Impulse wave. However, when the market structure is complex there is possibility that the movement can be counted in many different ways. This can result into subjectivity and the entire purpose of wave theory can be lost. To overcome this limitation Neo wave was developed that has more than 15 different rules to define a simple impulse pattern. Following are a few of them:

2: Wave 3 cannot be the shortest of the directional waves 1,3 and 5

6.  2 stage faster confirmation virtually guarantees that trend is over and bigger trend has started in opposite direction

The above shows only a few sets of rules for an impulse pattern as defined by Neo wave. I will be discussing all the rules more in detail in Masters of Waves Online training happening on 7th-8th January 2022.

We take a step ahead and combine this complex study of Neo wave to that of Time cycles. It is not always that both the studies will be in sync but when they are then if we combine it with time then the trade set up is of high accuracy which have the potential to give the best of the returns in shortest amount of time. 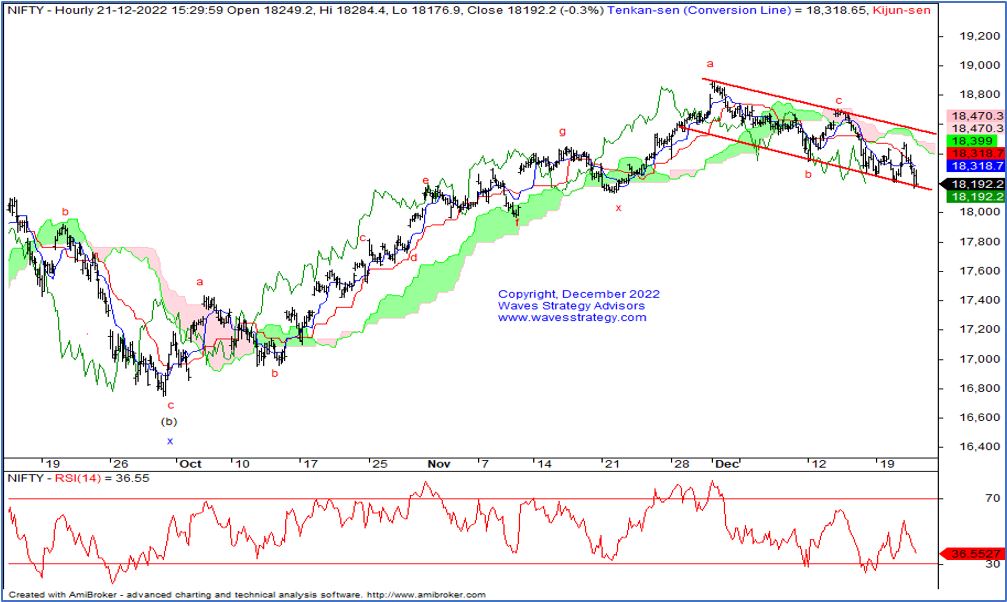 Nifty had a gap up opening in the previous session prices could not sustain higher and sharp selling was witnessed. Nifty at the end of the day formed a long bearish candle which suggest weakness in the indices. Shortly, prices are expected to move towards 18050-18100 levels. Whereas on the up side 18480 is nearest hurdle on the upside. Fresh buying can be seen above breach of the same.

On the hourly chart, prices seem to have followed lower high lower low formation. This suggest that short term bias can continue to remain negative as long as we do not see a close above previous candle’s high. On the other hand, prices have moved down by taking resistance of the cloud which suggest that any pullback towards it can be used as a shorting opportunity, valid as long as 18480 holds on the upside.  As per wave perspective, prices have completed wave c on the upside which opens possibility of a C failure flat pattern.

In a nutshell, Nifty had a volatile day and formed a big red candle end of the day. For now, use pullbacks as a shorting opportunity for a move towards 18050-18100. Whereas any break above 18480 is needed for fresh buying to emerge. 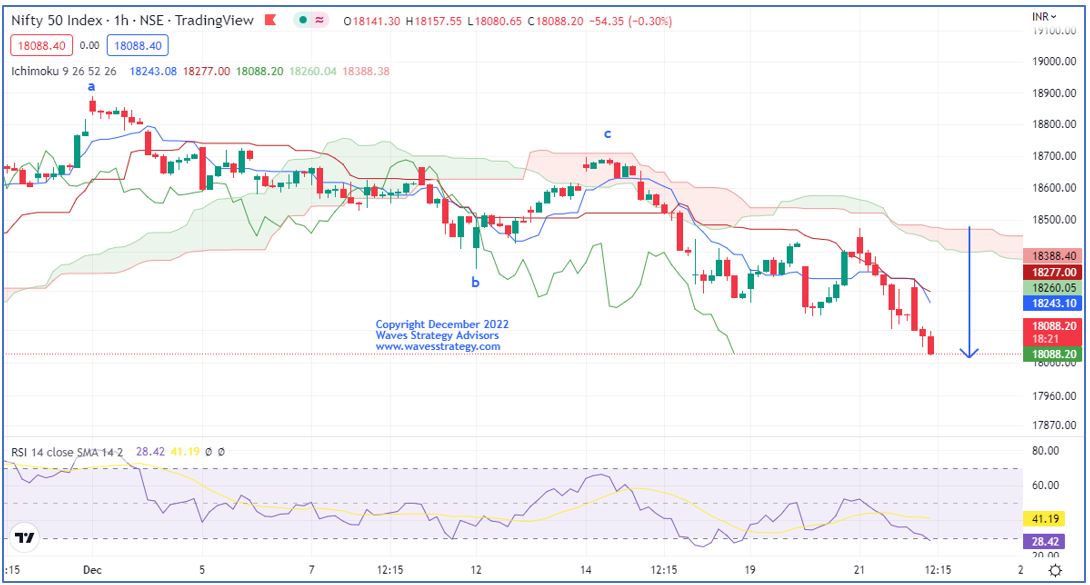 Happened: Nifty after a pullback made low near 18080 which almost near our second target of 18050.

The above chart clearly shows how understanding Neo wave pattern helped us to catch a total move of more than 400 points which we have been mentioning in our research report since past 2 days.

Master of Waves (MOW) Learn the science of Trading using Elliott wave, Neo wave and Time cycles for short term to long term forecasts in Master of Waves (MOW) – Most advanced Training on Technical analysis that will give the necessary edge to traders both for Intraday to Positional trading on 7th and 8th January 2023. Early Bird Ends on 25th December 2022. For more details fill out the form below