HDFC Bank was placed at a crucial point since it was placed exactly at the channel resistance and there were two possibilities either break above or reversed. Here you can see classic reversal on down side.

Ichimoku Cloud has been one amazing technique that combines various aspects of advanced studies together. It not only helps us to clarify the wave counts but also provides the cyclicality and trend following method.

By combining this method with Neo wave becomes a lethal way of market forecasting and identifying amazing trade setups.

I will be talking about these methods in much detail on how to select momentum stocks using Ichimoku Cloud, Neo wave in the upcoming training on Master of Waves

Look at the below chart of HDFC Bank which shows how to study Ichimoku cloud on sell side. 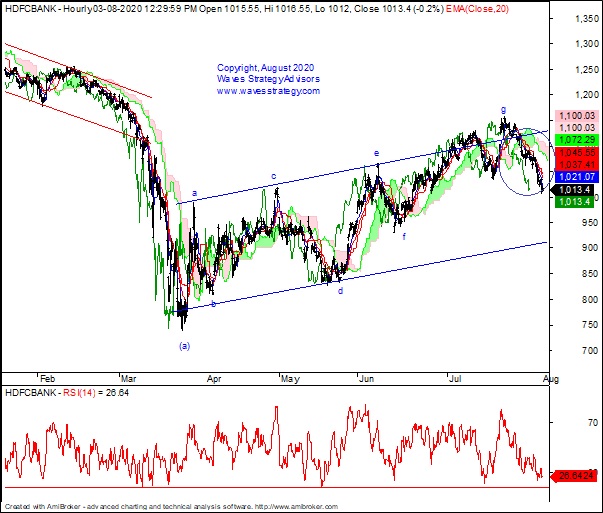 Elliott Wave analysis: On the hourly chart HDFC Bank seems to have started the second leg of correction within wave (b) in the form of 7 legged corrective Diametric pattern wherein wave g has terminated and currently next leg of correction has begun.

As per channeling technique, earlier we saw a minor breach above the channel however could not sustain on upside and reverse from the channel resistance. This shows that simple technique is also most effective at times.

SUBSCRIBE NOW to “The Financial Waves Short Term Update” which covers Nifty and 3 stocks on daily basis and published before the market opens and trade with the help of Technical analysis, Elliott wave. Also see detailed explanation with charts on the probable target levels for Nifty and stocks!