For a cycle practitioner the most important aspect is to understand that there are multiple cycles nested together. Prices behave in a cyclical fashion and cannot be independent to it. Everything in nature and financial markets is governed by cycles right from the Solar Cycle which is 11 years, Lunar cycle of 28 days, Seasonal cycle, Economic Kondratieff cycle of 54 years, Decennial cycle 10 years, Presidential cycle of 4 years and many more.

It is our effort to understand the various cycle currently being active on the given asset class and see where we stand with respect to them.

The simplest way of cycle identification is to see if there are low being formed in systematic fashion. There are various tools available to Detrend the prices and understand the underlying cyclicality. J. M. Hurst’s has brought forward Hurst’s Cycle analysis which has opened up another realm of looking at markets and timing it right from the smallest time frame to the biggest degree.

We are not getting into the science of cyclicality but will show the application of these cycles after careful evaluation and synchronization. Let us begin by looking at the bigger degree cycles first and scale down the hourly charts. 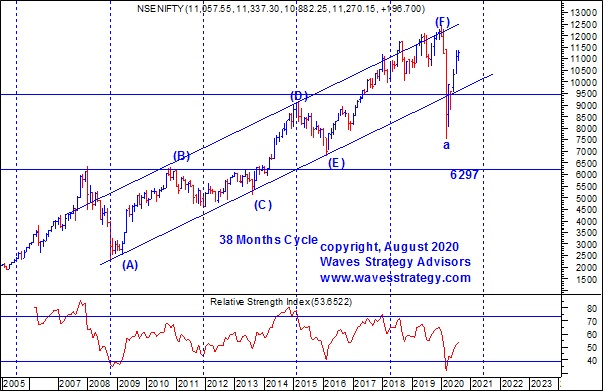 Following was mentioned in the May issue of monthly research report –

Nifty monthly cycle of 38 months – there has been a systematic lows every 38 months. Note that Hurst’s has identified standard cycles in harmonics of 9 months, 18 months and 54 months. But we are witnessing even a 2 harmonic cycle to 18 months which is near 36 to 38 months. This cycle as shown in figure has formed important lows on Nifty before it took off sharply higher. The only exception being high made in the form of Wave D where we witnessed a top instead of a low which is commonly known as inversion in cycle terms. Such anomaly is cycles are common as time is very dynamic element and we are trying to extrapolate it using average periodicity of 38 months. The last low formed in early 2018 and Nifty rallied higher after that showing series of negative divergences which we warned about over here. The final thrust on upside near 12430 was made on 20th January 2020 (January month is already known for major tops on most occasions) post which there was a sharp crash on downside. This crash as it took out the lows of prior cycle of 2018 clearly confirms that a cycle of one higher degree has turned down and we should not see 12430 to be challenged until the cycle low is due again. The next cycle low will be due only by…… So as per cycle analysis we should not take out …. levels atleast for a year now..

The above research shows how to Time the market using Advanced Elliott wave – Neo wave methods and Time cycles.

Get access to Intraday/ positional calls along with Elliott wave research report on Nifty, Bank Nifty, stocks and much more. Know more here

Ashish Kyal will be taking Limited Seats only as this is the First Ever Training on Cyclical Analysis & Time Forecasting combining Hurst’s and Gann Methods. Only a very few conducts it globally. Know more above Master of Cycles module here