Metal stocks have been under pressure since past many weeks. The serious selloff has continued in the stocks in the ongoing Bear market and one should avoid catching a low. The below research shows how Advanced Elliott wave – Neo wave pattern can help in identifying the trade setup for big moves. 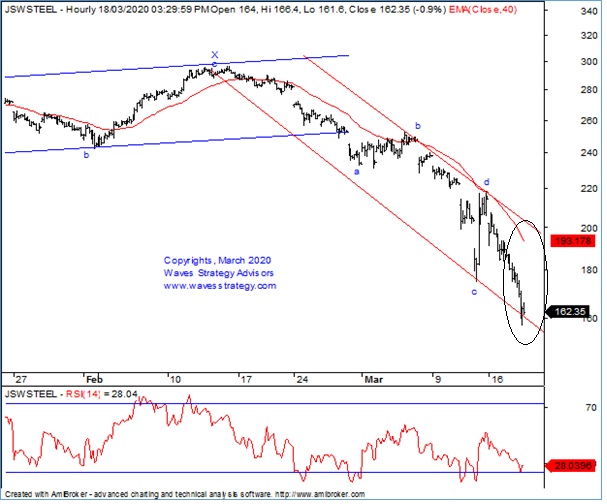 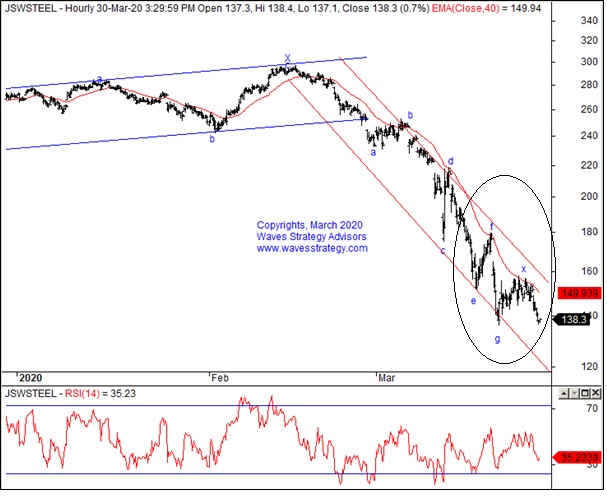 Elliott Wave analysis: Following was mentioned on 19th March when the stock was near 164 levels.

On hourly basis, Prices are seen precisely moving within the red downward slopping channel and currently placed near the channel support. Further it is important to see whether prices reverse or bounce off from the same. As per wave perspective wave Y seems to be forming Diametric pattern wherein wave e (blue) is under formation.

The above shows that by understanding the pattern under formation one can form prudent trade setup. As we were aware prices were at lower end of the channel and wave e of Diametric was probably completing a pullback was expected and then the down move resumed after giving a pullback. This only shows power of Advanced Elliott wave – Neo wave and why it is important to learn new patterns from trading perspective.

To ride the next trend in Bear market subscribe to “The Financial Waves Short Term Update” which covers Nifty and 3 stocks with in-depth research using Elliott wave. You can subscribe in less than 2 minutes over here

Learn the power of Elliott & Neo wave with Time cycles and equip yourself with tools of technical analysis in the upcoming Online Master of Elliott Waves, Neo wave with Hurst’s Time cycles (MOW). I will ensure you stop following the news and start trading the charts because this is what is required to be successful. Know more here