Crude had been in news over past few months due to the sharp movements we have seen in this commodity. We witnessed Nymex Crude entered negative territory that shook the entire financial world and many of the theories that never imagined a commodity can also trade negative. Let us see the trend of MCX Crude since the lows formed. 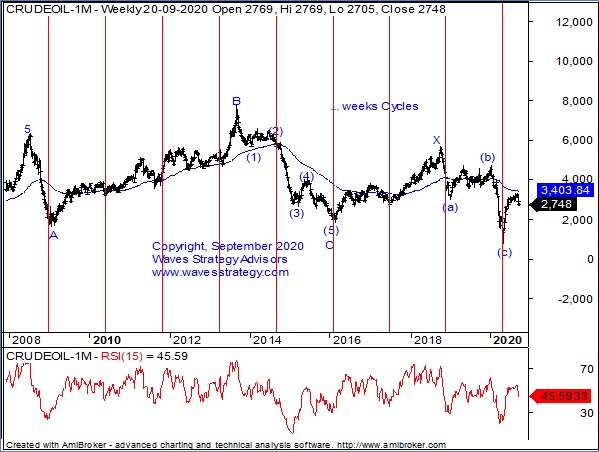 Wave perspective: As shown on the weekly chart of MCX Crude, it seems that the correction that started in 2008 is still not over and the rise seen in 2016 – 2019 was only wave X. The next set of downside correction is currently on-going and prices are now in wave (d).

Weeks’ Time Cycle: We are showing  weeks Cycle on the chart and this cycle has worked amazingly well in capturing the major lows. Post the cycle low formed near the life time low where wave (c) was completed buying was witnessed in form of wave (d). It only shows how amazing the cycles work on commodity markets as well and this Time Cycle has helped to capture major lows. It is big cycle which will turn bearish in around 35 weeks. Prices are currently trading in the first half of the cycle which is usually associated with the uptrend. However, it also indicates that the low made near April 2020 might remain protected but short term down move cannot be ruled out.

In short, The above analysis clearly shows how well the cycle theory works. We have been using these technique coupled with Elliott wave and Neo wave to get a medium trend on Nifty, Commodity, Momentum and Multibagger stocks.

Get access to the research reports and call tips on Commodity directly on whatsapp with clearly defined stoploss and targets along with detailed charts. Know more here

Learn how to apply Hurst’s Time cycle methods with Gann Cycle for successful trading. This training is meant for those who wants to time the market to the very hour of the day. Register now to our upcoming training – Master of Cycles on 26th and 27th of September, 2020.