Our outlook was bullish anyways and the wave pattern was already suggesting this. COMEX Gold has been moving in an impulsive fashion from the low of 1200 levels and this rally still seems to be going strong.

We have shown detailed Elliott wave pattern for both Gold in INR and USD terms. Gold is moving higher in both the currency pairs over the medium term. 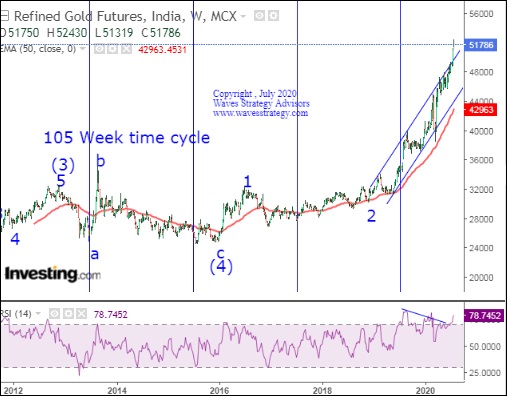 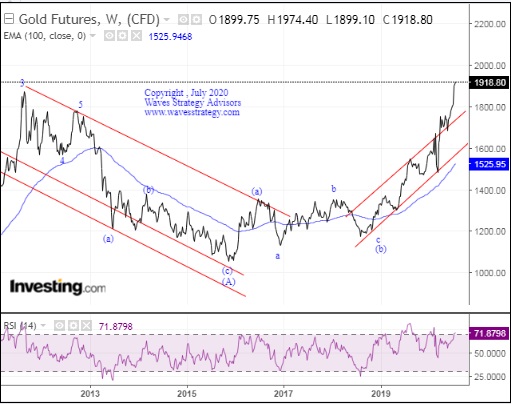 Elliott wave perspective: COMEX Gold is now under Complex Correction pattern and wave (B) is on-going on upside. Within this minor wave (b) unfolded in the form of a flat correction. Post wave (b) impulsive movement is being witnessed in form of wave (c). This wave (c) has already travelled more than twice the length of wave (a) and seems to be sustaining well above the rising channel. This rally could continue higher towards 1800 levels if the support near 1600 level holds.

50 Exponential Moving average: This 50 week EMA has been supporting the rise in Comex gold in the form of wave (c). As far as price sustains above this average, we expect the uptrend to remain intact. Also the slope of the rising 50 EMA shows the strength of the trend.

MCX Gold: Gold in terms of INR has continued to move higher and is currently brushing near the upper channel line of the rising channel. As per wave theory price is moving in wave (5) of primary degree and price is moving in the form of wave 3 within it which suggests an overall bullish outlook. Although we can see negative divergence on the weekly RSI indicating a dip in price is likely over the medium term towards 43000 – 44000 levels. As the 50 week EMA has support the rally for a long time, one can use the dip towards this average as a buying opportunity for a move higher towards …… levels or higher.

In short, Gold overall tone looks to be bullish both for MCX and Comex. It is best to use any dips as buying opportunity in this asset and any downward movement in global equity markets might provide further positive thrust to this asset class. For MCX Gold we can expect price to move higher towards 49000 levels over time as long as support near 42500 holds.

Happened: Prices moved precisely in sync of our expectations and as mentioned since it was an impulsive rise we achieved our target of 49000 levels. Still Gold prices are glittering higher and higher recently made new high is near 52430 levels.

You can also learn such amazing techniques and its application by participating in the Masters of Waves (MOW) training which would include; application of various technical methods along with Elliott wave, Neo wave, Ichimoku Cloud and Hurst’s Time cycles. Only limited seats, Register NOW