Nifty: How to Trade Using Ichimoku Cloud and Channels

Nifty has shown violent moves in either direction. But if you combine even two important methods like Channels and Ichimoku Cloud you can probably make a killing in the movement of last few weeks or rather days.

See how one can trade Nifty using Ichimoku Cloud.

Ichimoku cloud is a classical indicator within technical analysis that incorporates multiple methods and forms a very strong basis to identify the trend, momentum, reversals and much more.

See yourself below chart of Nifty on 60 mins scale with Ichimoku cloud and channels. 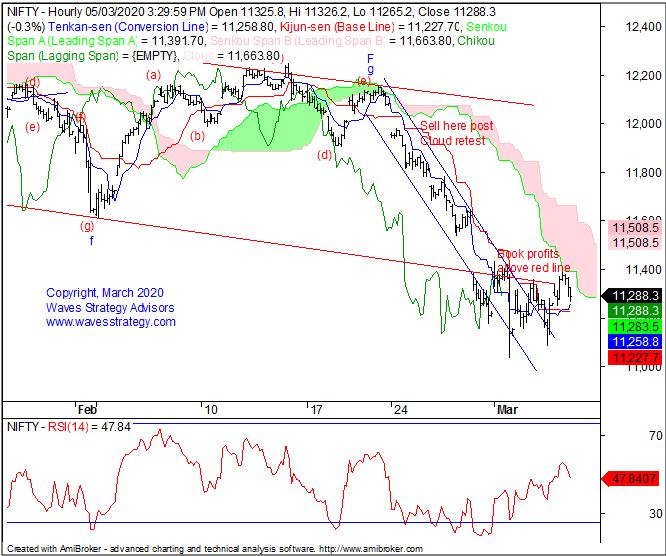 The major downfall in Nifty could have been captured using simple trading systems like the Ichimoku. As shown on the hourly chart of Nifty you can see that price broke below the Ichimoku cloud on 18th Feb 2020 and then went on to retest the cloud. As price broke the first swing low formed below the cloud near 11900 level, a short trade was initiated and as the stop loss was set just above 12000 as there was a small swing high which formed at that level.

As prices moved below the cloud there was an indication that the next wave on downside has started. To get apt risk reward ratio with good stop it was better to wait for retest of the cloud or a bounce back after breaking below it. The stop loss was also very effective. As the wave theory suggested a bigger degree downfall, it is best to ride the trend following a trailing stop method keeping the close above the base line as the indication for profit booking. This happened near 11350 that clearly suggested one should book profits and exit from short position and wait for the pattern to resolve for taking fresh positions. This would have given a whopping 630 points move on Nifty. We have maintained our bearish stand during the fall and mentioned it in our daily research report.

Get clear 5 Trade Setups in the upcoming training scheduled on 21st – 22nd March in Master of Technical analysis (MOTA). Also learn about Neo wave, Elliott wave, Time cycles scheduled on 18th – 19th April (MOW). You do not necessarily require prior knowledge of technical analysis and we will ensure you get it right from the very basic to most advanced level. Dedicated discussion groups will be created to keep the learning going in future. Register now under Early bird offer which ends in 5 days. Know more here