Nifty Mayhem – Are you Ready for BEAR

Global Equity, Commodity markets are collapsing and everything is falling like a pack of cards.

Crude collapsed by more than 20% and Nifty was down by nearly 700 points at one point of time.

I have been talking about repeat of 2008 in past entire week and the same has been unfolding exactly.

In my latest webinar I have talked about financial paralysis and economic meltdown, if you did not see it on 6th March, see it over here 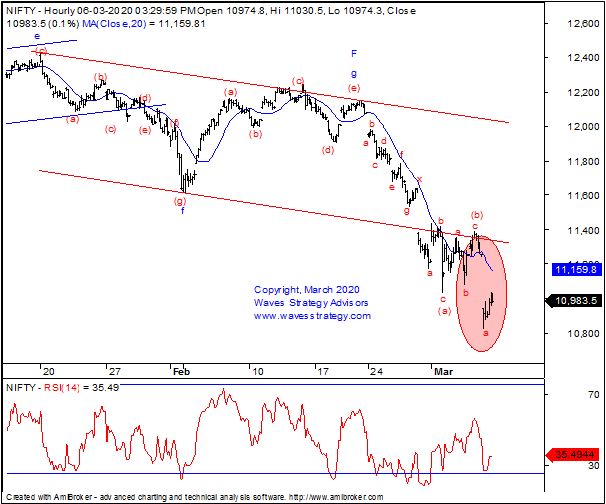 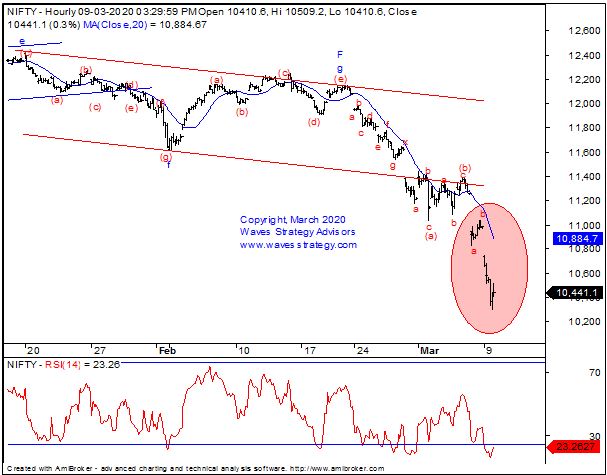 Following was mentioned in the morning before equity markets opened:

Anticipated: Nifty had a big Gap down on last day of the week and prices continued to trade negative throughout the day…. This was one of the biggest Gap we have seen in recent history measuring 327 points. Many are assuming this being the 3rd Gap should act as exhaustion but this being the biggest Gap in the entire fall one should refrain from catching a low here unless prices fill the entire Gap area.

Yes Bank fiasco simply raises the question on India corporate governance, RBI as they are supposed to be ensuring banks are adequately capitalized and SEBI – Yes Bank stock rallied by 25% a day prior and later the moratorium was announced thereby trapping majority of the retail traders or investors. The current scenario looks very similar to that of Lehman 2008 collapse which sent the global financial system in turmoil and Yes Bank is now a classic example that shows nothing is too big to fail. The repercussions that Lehman bankruptcy resulted were enormous and Yes Bank fiasco will only lead to jeopardizing the real estate, NBFCs, Bond holders, Mutual Fund houses and many more.

We are showing the internal counts of wave G which looks to be forming a bigger degree Diametric itself. Prices are now in wave (c) and 61.8% projection to that of wave (a) ………. So, it is best to avoid catching a falling knife and stay in the direction of the downtrend ……..In short, Nifty trend continues to be negative and one should avoid catching a low. Further move below 10820 will accelerate the selling pressure…..

Happened: Nifty had another Big Gap down opening near 10742 and prices continued to collapse from there without any bounce back. There is carnage across the board and many are sitting on the sidelines waiting for market to recover so that they can enter into the trend. Do understand current market scenario is equivalent to that of 2008 and only someone who has traded the chaos during that period will understand how fast the BEAR market moves.

You cannot miss another big opportunity in this bear market and should act fast. Get access to the daily morning research “The Financial Waves short term update” and Monthly research. See yourself how the entire world is highly correlated now and it is the beginning of the BEAR MARKET. You will enjoy it only if you are fast to act. Subscribe here

Do not have time to see the reports, we have given short calls on Nifty, Bank Nifty, stocks, Options and it has worked out extremely well. Get access to the daily advisory calls directly on Whatsapp and SMS. Get access here

Learn how to cash the chaos by understanding that the Elliott wave patterns and markets are moving in lock step fashion the way we have been expecting as per that pattern. Attend Become Market Wizard (BMW) training covering two modules – Master of Technical analysis (MOTA) and most advanced training on Elliott wave, Neo wave with Time cycles (MOW). Register now over here