Nifty has been rising since past two days which is against majority of expectations.

With the extension of lockdown announced everyone expected markets to start the downtrend but it continued to rise. From the lows of 7511 Nifty rose more than 1700 points despite that the news flow only got worst. This clearly highlights the fact that trading on basis of news can be disastrous. See yourself how by knowing Advanced Elliott wave – Neo wave one could have been able to capitalize the rise.

Look at the below chart of Nifty. The below research was published on 9th April 2020 in the morning daily research report – The Financial Waves short term update 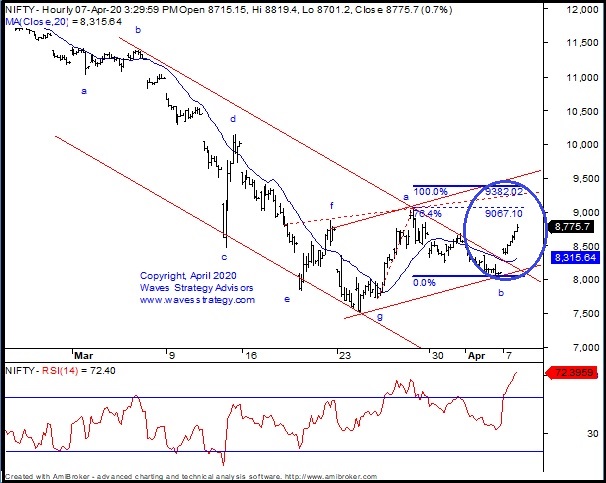 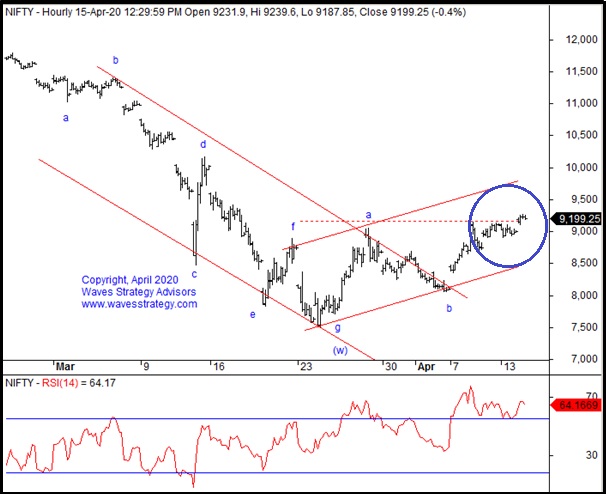 On the hourly chart we can see formation of an inverted head and shoulder pattern in progress, we have marked its neckline with a dotted red rising trend line. As per the wave perspective minor degree wave b within wave x completed near 8000 levels and price is now moving higher in the form of wave c on the upside. As wave b retraced more than 61.8% of wave a and also took more time to form than wave a, it confirms that a flat correction is unfolding as per advanced Elliott wave. We have shown 76.4% and 100% projection of wave a form the bottom of wave b which lie at 9067 and 9382 respectively which can be considered conservative targets on the upside for wave c as this zone also coincides with the upper channel line.

In a nutshell, Nifty showed strong recovery to the upside in the previous session with broader participation. The short term trend is bullish. Use dips as buying opportunities for a move towards 9070 followed by 9380 as long as 8500 holds on the downside. BANG ON!

Happened: Nifty moved precisely as expected and crossed above the first target level of 9070 levels. It was at 8775 levels when we projected for more than 600 points of up move despite of all the pessimistic news flow. This shows the power of knowing advanced Elliott wave – Neo wave.

3 days to go – Learn the power of Neo wave and various advanced indicators and equip yourself with patterns in Online Master of Elliott Waves, Neo wave with Time cycles (MOW) happening on 18th and 19th April 2020. Hurry up! Only few seats left. To register Contact us here or call on +919920422202