Nifty Ready for Volatility YET! Go Ahead…

Nifty had a minor negative start yesterday and prices consolidated in a range till 12 pm. Post that the selling pressure started kicking in and prices crashed on downside losing more than 600 points touching an intraday low of 13131 levels. The selling was across the board with stocks like Tatamotors, ONGC, GAIL losing nearly 10% and all 50 stocks out of Nifty closed in negative. This is the reason why in our webinars and reports we have been talking about it is time to be alert and not complacent. This is how the market moves and there is very less reaction time for traders who does not understand the risk they are dealing with. Majority had been targeting Nifty for 15k – 17k levels but for us the risk does not warranted for giving such blatant targets when it was trading near the important resistance levels that too with slower momentum. Just one day of fall does not conclude that the bigger down move has started but it does showcase how vulnerable the traders can be if they do not put stoploss in the system. 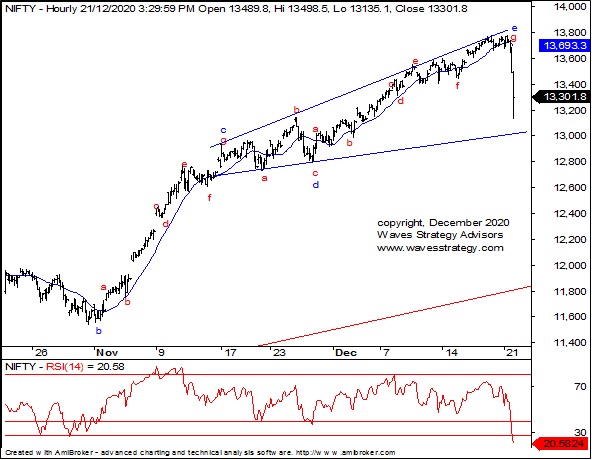 Following was mentioned in the morning Equity research report –

It seems that the entire rise has been in overlapping and not impulsive and we are now in wave f. Post completion of wave f we can see one minor push back on upside in the form of wave g. This also looks plausible as many who have missed the trend will start jumping in and so reversals on upside can be equally violent as well. So from here on it is best to keep a watch on the ……….. levels. A follow-up closing below this level will suggest that the strong hands have distributed to the weak hands and are now out as the volumes were heavy over past few days without any significant move – a classic negative divergence between prices and volume. Any reversal back above ………… will suggest wave f is over and final wave g has started higher which can again trap investors and traders giving opportunity to smart money for further offloading their positions.

In a nutshell, yesterday’s selling only showcased if one is complacent and not alert how sharp markets can move eating away entire profits and thereby it is best to remain cautious rather than vulnerable. Move below ……… will resume the selling pressure further towards 12800 levels whereas move above ………. is now required for up move to resume. Let us see which side the pendulum turns despite of all the euphoria and optimism we have been seeing across the board. The blame game will again start on the Covid-19 situation if the market starts correcting because that will seem to be the only logical explanation for the CRASH!

To get the exact levels and ride the trend get access to Momentum Call, Nifty, Bank Nifty, Stocks Intraday calls and complimentary research reports along with that. Get access NOW

Learn why during such volatile times techniques like Elliott wave, Neo Wave, Time cycles that can be applied even on Intraday charts become all the more important. Equip yourself with tools of forecasting for making trading less anxious. Join now under the Early Bird. Know more here or Whatsapp on +919920422202