Nifty and broader market have collapsed in the month of March. Prices formed a strong bearish monthly candle having a high near 11433 and low at 7511.

In March, Nifty collapsed by 3922 points. This is a huge fall of more than 34% and biggest decline in terms of price point Nifty has historically seen. It clearly indicates that the bigger cycles have turned negative that resulted into such sharp declines.

We combine Hurst’s Time cycles along with advanced Elliott wave – Neo wave methods to understand the trend of markets and deriving trades and investment decisions.

Now look at the below chart which was published in the monthly research report that showed well in advance that the entire market has topped out and the level of 11400 will not be taken out until the next cycle low is in place.

Now with this information you can form some amazing strategy on Options. Everyone is too busy learning Option strategies but without understanding how markets are going to behave the entire learning is a complete waste. The only tools that can give you such forecasting ability is Elliott wave and Time cycles. 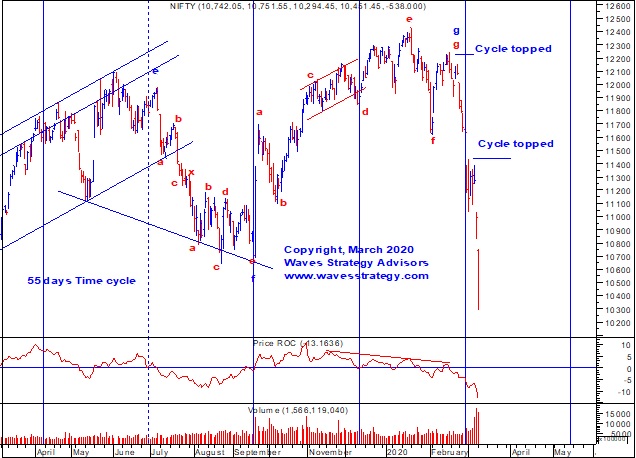 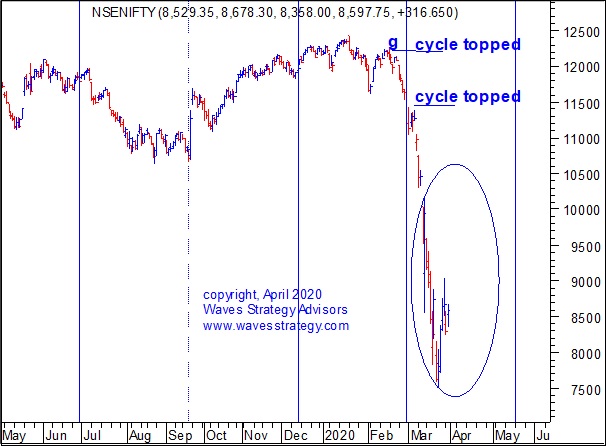 Bear markets are associated with equally fast reversals and dramatic short squeeze. Do not be surprised to see that happening but as of now there is no price confirmation. Infact, we have not seen a close above the prior day’s high for consecutive 12 days. Only a close above prior high will indicate a pause in the downtrend and we will hint it in the short term research report.

In a nutshell, we are witnessing collapse in global equity markets followed by Crude which was very typical to that of 2008. Also the magnitude of selloff is similar to how it started during that period of time. Media will keep sensationalizing about Corona Virus because that is what everyone wants to hear about even when more deaths are witnessed due to other respiratory disease which is way beyond being witnessed through Corona virus. And for major Government and Central banks it is the easiest way to escape from taking responsibility of the financial bomb created over a decade with easy liquidity and Quantitative easing. Everything is only imploding now and it will continue eventually. Short term pullbacks are not ruled out which will be again attributed to receding fear of Corona virus but when the 3rd leg of correction starts without any events majority will come to the point of recognition that global financial and economic markets are indeed headed for the worst’s times seen in over a decade! Be prepared to embrace the crash and equally sharp reversals but that will be only temporary retracements in a BIG BEAR market which has only started!!!

Happened: It takes guts and courage to come out so bold and strong about the Bear market. We published an interim update after that as well citing the magnitude of fall with downside targets for this Bear market. All of this is possible only by knowing Elliott wave, Neo wave and Time cycles.

Option Trading: With this information an Option writer would have known that 11500 was the level to be protected for months and so can safely write the Call options of the prudent strike price. Also they knew writing Put options will be disastrous but to use pullbacks to rather buy Puts even though it was expensive and write Calls as well.

Attend the Most Advanced Training on Elliott wave, Neo wave and Hurst’s Time cycles which are must tool that anyone trading in Options should know. Any strategy will be applicable only if market forecasting ability is strong. It is Online for the first time ever on 18 th – 19 th April 2020. Early Bird ends in 4 days on 5 th April. Act now and joyfully trade the market – Know more here