CoronaVirus in India, What will happen to Stock market?

Coronavirus was followed by important bottom in Chinese stock market! Yes, read it again. I am not high but see the proof below.
Everyone had been too focused on looking at the market movement due to the epidemic outbreak and the death tolls resulting into the global economic disruptions. But, stock market is the barometer of the social mood. Coronavirus erupted at an extreme in negative social mood, a time when people are most susceptible to disease.

Now here are some interesting facts: Major global epidemic outbreak has been during the extended period of bear markets as pointed out by Robert Prechter, Executive Director, Socionomic Institute. Stock market act as a barometer of social mood and the depressed stock market represents negative social mood. It is during this period that the society is more susceptible to the epidemic outbreaks.

Look at the below chart of Shanghai composite weekly: 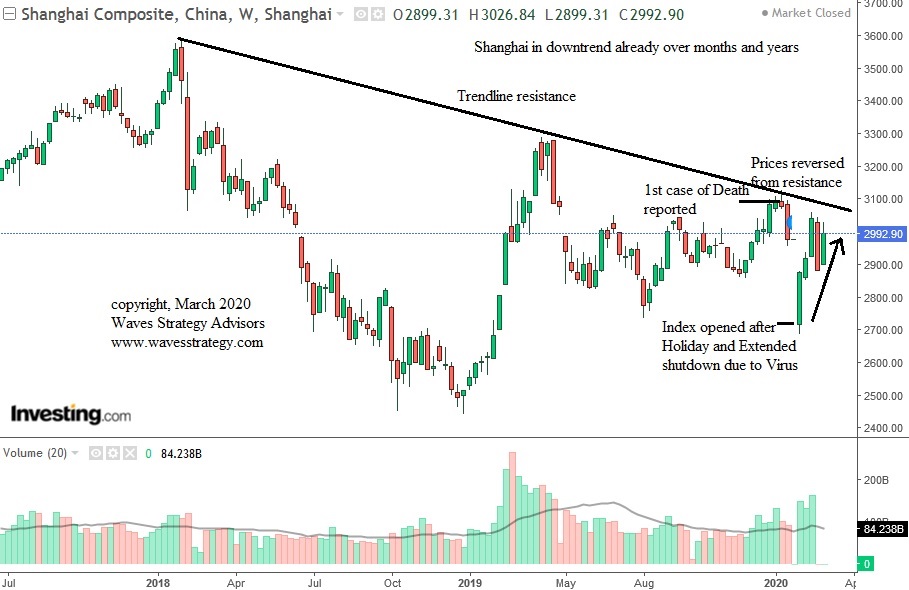 The above chart shows that Shanghai composite index had been in a downtrend for many months and years.

– 1st death case due Coronavirus was reported on 11th January 2020.

– On January 22, death tolls in China rose to 17 with more than 550 infections. Chinese stock market was shut from 24th January on back of extended Holiday and later due to epidemic outbreak.

– Chinese market reopened on 3rd February 2020 with 8% cut from the closing and formed a low near 2685 levels.

– Post that the index continued to rally all the way towards the high of 3058 made on 21st February 2020 thereby gaining a whopping 13.89% in just 13 trading days. (Just for your info both percentage gain and trading days took to reach there is a prime number)

– Chinese market showed one of the strongest momentum rise it has seen over months post it opened after the epidemic outbreak.

Do you still think epidemic is responsible for the negative social mood or is it the other way around? If Coronavirus is the reason for stock market collapse then why is Chinese stock index (origin of the deadly virus) still trading much above the level after the major outbreak being reported. Infact, the index has reversed from the classic trendline resistance and has continued to move as per the Elliott wave pattern.

Now let us see where is Indian stock index Nifty placed with 3 cases of Corona virus being detected on 2nd March 2020. 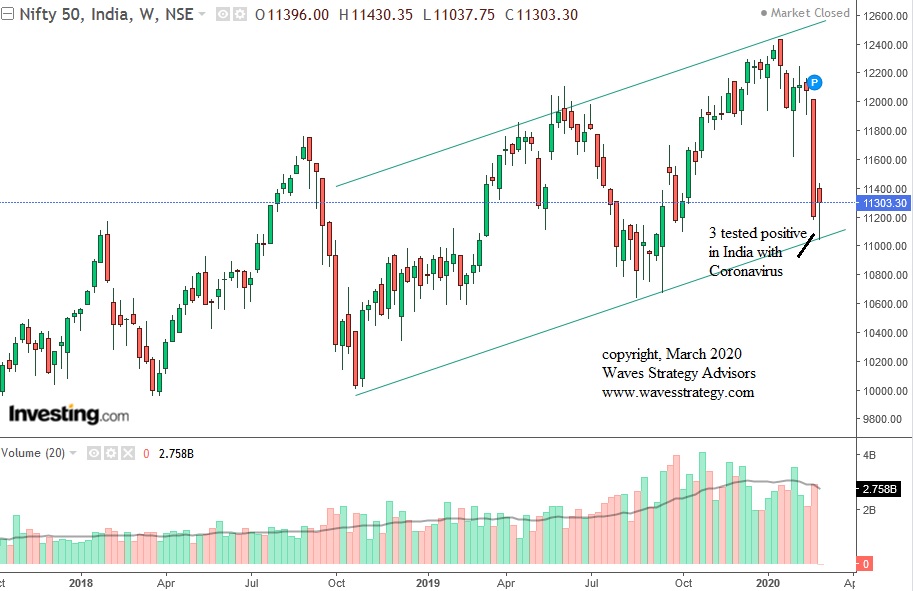 Nifty witnessed a sharp fall which was also witnessed earlier during September – October 2018, June to August 2019 and now from January till March 2020. The magnitude of fall in all of these instances has been similar. Infact, the fall witnessed during 2018 was much bigger compared to the current movement on downside.

– India reported 3 cases who tested positive with virus on 2nd March 2020. Nifty formed a low at 11037 on same day which was exactly at the lower trendline connecting earlier lows.

– Nifty is already up by more than 2.5% from lows in single day protecting the channel support so far.

– The Time cycles have already bottomed out a day earlier and the low formed on Nifty is very much in sync with this cycle that we have been following for almost a decade and which has worked on most of the occasions.

The entire facts given above should be understood in the light that it is social mood of the crowd that is responsible for movement of stock market and an extended negative social mood makes them more susceptible to diseases and epidemic.

Your entire perception towards the cause and effect will change if only you stay focused on the facts and the patterned behavior of the market which is very well defined as per Elliott wave analysis that carries the forecasting ability and the news will eventually follow. Post markets recovery you will end up reading the following headlines:

I do acknowledge the fact of loss to life caused due to this deadly outbreak and we should do whatever it takes to support for this global cause ensuring livelihood of affected gets back on track. These are instances when it makes the world as “ONE NATION” and demonstrates the ability of  Human Being to fight back against all odds.

Learn the application of Elliott wave, Neo wave and its combination with Hurst’s Time cycles, the most powerful forecasting tool in Technical analysis. Register now under Early bird offer which ends within a week. Know more here

Get access to the daily research report – The Financial Waves short term update and the monthly research and see yourself how will Nifty move from here on irrespective of the events or news that might look logical but is not the way for successful trading. Subscribe here